Chuck Coverdale, 62, of Milford, DE passed away suddenly on Tuesday, March 3, 2020 at home. Chuck was born in Milford, DE the son of Charles R. Coverdale and the late Rosemary (Haight) Coverdale. Chuck was a graduate of Milford High School class of 1976. He owned and operated Chuck’s Heating and Air Conditioning in Milford.

Chuck was a Life Member of the Carlisle Fire Company, Inc., joining September 1975.  As well as serving on numerous committees he held the position as President, Secretary, Director #1, Building Superintendent, Fire Police, and currently serving as Vice President.  During his 44 years of service, Chuck was the recipient of the Presidential Award twice for his dedicated service to the department and community. He also was very active with the Kent and Sussex Volunteer Firefighters Association. Chuck was an Honorary Member of the Ellendale Fire Company and enjoyed cooking and helping the Harrington Fire Company with many of their crab feasts and fund raisers.

Chuck loved being out on the water every opportunity that he had. He was an avid and diehard ocean and bay fisherman. He did receive his captain’s license and was known to all his fishing buddies as “Captain Chuck”. In addition to his fishing, he enjoyed scuba diving, hunting and duck carving. He was also known for his cooking abilities and it was well known among friends that he could cook any woman under the table! Chuck was preceded in death by his mother Rosemary T. Coverdale in 2018.

A visitation will be held from 12 – 3 pm on Sunday, March 15, 2020 in Grier Hall of the Carlisle Fire Company, 615 N.W. Front Street, Milford where a Celebration of Chuck’s Life will be held at 3 pm followed by firefighters’ honors. Burial will be private. In lieu of flowers the family suggests contributions in Chuck’s memory be sent to Carlisle Fire Company, P.O. Box 292, Milford, DE  19963. Arr. by Lofland Funeral Home, Milford. Letters of condolences may be shared with the family at www.loflandandmcknatt.com. 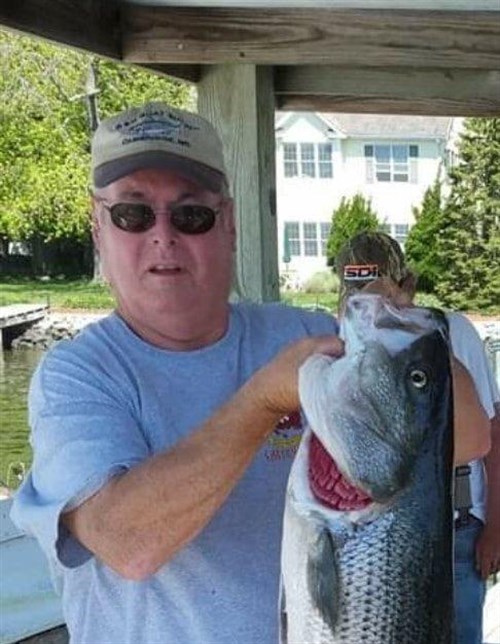